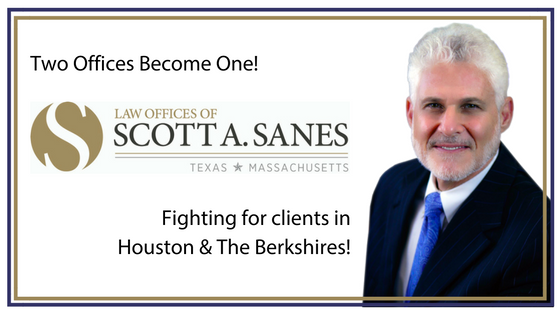 34 years of trial experience in Houston and in the Berkshires

Great Barrington, MA (January 3, 2016) – As of January 1, 2017, personal injury trial attorney Scott Sanes represents clients in the Houston area of Texas and the Berkshires in Massachusetts as Law Offices of Scott A. Sanes (www.scottsaneslaw.com). Sanes most recently represented his Massachusetts clients as the Law Office of Scott A. Sanes, since 2014, and his Texas clients as an owner/partner in the firm Rice & Sanes, since 2007.

“It was time to bring both my practices together under one umbrella to exclusively practice personal injury trial law,” says Sanes. “Since 1982 100% of my practice of law has been representing injury victims while many of my law partners engaged in other areas of law. I have always aggressively represented personal injury victims from the initial claim stage through litigation until the matter is settled or a jury verdict is rendered.”

With over 34 years of experience representing personal injury victims in Texas, Sanes opened his office in Great Barrington after Massachusetts changed the law to allow questioning of potential jurors by lawyers in 2015, a process called Voire Dire – a vitally important process which effects the outcome of every jury verdict. Sanes is the only lawyer in the Berkshires with three decades of experience in questioning potential jurors.

Sanes offers his deep experience to injury victims throughout Massachusetts and specifically in Great Barrington where he lives with his wife and two children. Sanes can be contacted through his website www.scottsaneslaw.com, by phone (413) 429-6400, and by email at scott@scottsaneslaw.com. Scott can also be found on Facebook @scottsaneslaw.

When people are involved in car wrecks, the most common question they have is “How…

Why do personal injury attorneys have such a bad reputation? Well, there are a combination…

There was a big change in Massachusetts in 2015: for the first time in the…

We can all agree that this election cycle has been divisive. Many of… 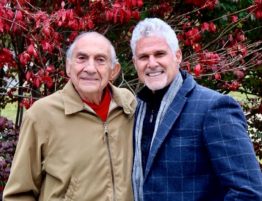 Adams also came to understand how important it was that his carefully crafted photos were reproduced to best effect.